To live a life that is more mindful, one must recognize one’s own toxic traits. Why? Because a better you is not only good for you, but for everyone else around you. For example, if your toxic trait is being irrational; you act out on a whim- give absolutely no fucks about consequences because you just do and say things without thinking first. Say you suddenly became conscious of your toxicity; realized how many times you’d gotten yourself and your friends in a tight spot on drunken nights out, for saying shit without thinking or for throwing the first blow instead of walking away. Say you really reflected on this, to the point of introspection and you decided it’s not necessary to unleash hurtful truth bombs such as calling your friend fat because that may take a toll on her self- esteem. Wouldn’t you agree that changing into a more evolved self that puts into consideration the effects of their actions upon others and onto themselves will be good for everyone? It would save you your dental formula to say the least and your friends the headache of having to put up with you. Right? Hence, the more we work towards self-development, we not only benefit ourselves but also the people around us.

Even before I had solid awareness of what an indecisive person looks like, I’d have that word thrown at me and it sucked. From my perspective, I was just a girl who liked things a certain way, a girl who really liked to think things over and over; maybe change my mind a couple of times before coming to a conclusive decision. It actually bothered me that people around me put a label on what I thought was barely a character trait. All I did was exercise my freedom of choice and really take my time before landing to the actual choice. It may seem insignificant but it’s my mind that’s going to go wild over picking a red colored top instead of a mustard one. And for what? Because my friend who took me shopping was getting agitated over my lack of instant ability to just fucking pick- and to ease her frustration, I had to just pick something!

Okay! Fine, I get it. I get that indecisiveness is freaking annoying to whoever is watching because they don’t understand why when faced with a trivial choice such as picking something from a diverse dessert menu you act like it’s a life-or-death situation. They don’t get why you can’t pick one out of two or more things and make it fast. I’ve been in that situation severally and the energy I get is, “it’s not the end of the fucking world Polly!” “Pick something so the rest of us can get on with our lives…” The worst times for me to be faced with the inability to choose fast have been when I’ve asked someone to tag along with me for shopping, house hunting and whatever else I’ve needed company for, knowing I’d have to do some decision making. Here’s the thing, I don’t mind taking my time to decide, especially when I go shopping because at the end of it all; when I’m home, I want to be looking at all the stuff I bought and feel pleased with my decisions. But then again, it’s a pain in my ass if I take you with me because I needed a friendly face to tag along and the entire time I’m struggling to decide, you’ll be there, exchanging glances with the attendant- telepathically cursing at my indecisiveness. I had a hard time understanding why people did not get me and just assumed that I did not know what I like.

What really hurt is that when roles were reversed and I had to be the one waiting on someone else to choose, it felt like I exercised patience and did not mind the process because I understood the struggle. Even in situations where it has felt like I could literally barf over someone else’s uncertainty- I give insights instead of giving off energy that will only make them more anxious about making a conclusive decision. When you know the struggle, you tend to have an increased level of understanding; and I know that indecisiveness takes a toll on one’s mental health just like any other forms of mental illnesses known to man.

To be more mindful is to actively pay more attention to the world around you, while also ensuring to look inward and be aware of your thoughts and feelings. It is important to do so in your self-development journey. When you notice your surroundings, (could be a place, a situation or even energy surrounding a place or a certain situation) you consciously become aware of your actual feelings towards it in a way that’s totally rational. Having seen how my indecisiveness was taking a toll on me internally and turning those around me against me, even if just for some moments- I decided to take a more mindful approach towards becoming more decisive.

I was getting tired of the judgmental looks every time I’d get torn between options. Deep down it was nerve-wrecking and a factor contributing to my anxiety; the fact that other people could not fathom why I devoted so much of my time and to an uncontrollable extent, their time, to the struggle-filled process of wanting to pick the most perfect option there is out of several options. I started to look inward and sought to figure out what the heck my problem was. I always say that, all the answers you seek are already within you and that has proven to be true for me. The problematic part of my indecisiveness stemmed from my dire need for perfectionism. I’ve always wanted things to look and feel a certain way, for things to follow a certain order. And when I couldn’t control stuff or be on top of the situation, there was always this sucky feeling inside me- you’d be surprised how much that would want to make you take the feeling out on someone by sulking the entire time they’re talking, maybe even give unnecessary rude replies. On that note, I apologize. It was never about you. I then started to be more mindful; acknowledging the moments when I felt unable to make a choice whether big or small and consciously reckoning with myself why that was. I realized that I had been living and re-living this toxic pattern where I was afraid to choose because, what if I chose and there was better? I actually had episodes where I’d obsess over the decision-making process so much then end up choosing the wrong thing and in turn obsess about choosing the wrong thing- and by that, I mean beat myself up about it by wishing I could go back to moments before or maybe undo it somehow and make the ultimate perfect decision. And we all know how pointless that is- it changes nothing. Your mind tends to spiral out of control when you’re playing could’ve- would’ve-should’ve. It’s not a pretty feeling!

Over time, I’ve learnt to incorporate some mindful exercises in my daily life routine that have helped me become more decisive:

mindful state of being: Chapter 1

mindful state of being: a journal entry

What to expect from PollyNation 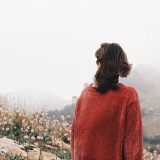 Insights on mindful living that will help you become more connected with self, with the divine force of nature and with the people you love. A look at life from a more spiritual perspective. On this platform, I share life experiences and milestones with regard to everything that encompasses personal growth.